Consumption in China to inject confidence in post-pandemic era 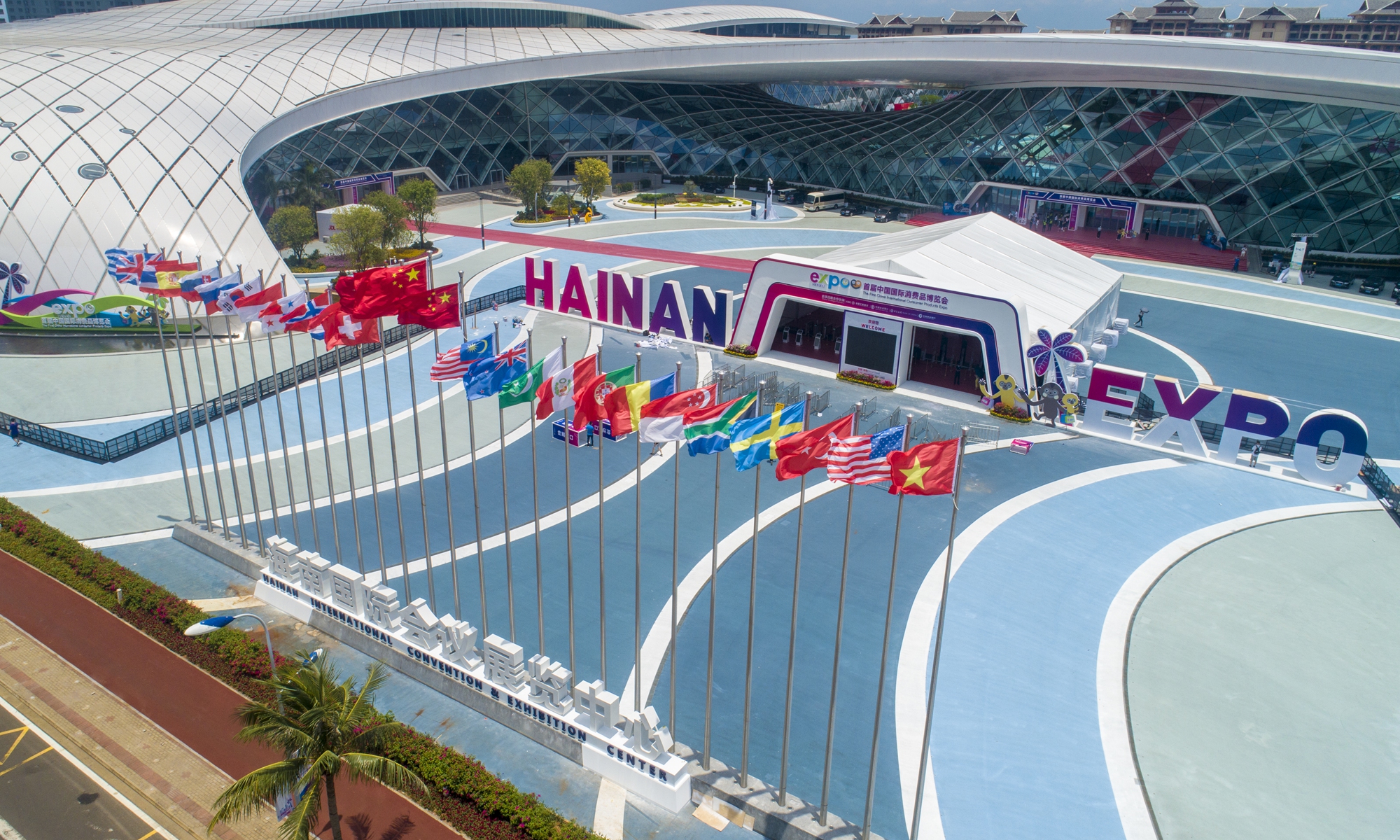 On the first working day after the May Day holidays, which generated travel-related spending with year-on-year growth of 138.1 percent to 113.23 billion yuan ($17.5 billion), consumers in the world's second largest economy now embraced another shopping feast - the first China International Consumer Products Expo (CICPE), which is scheduled in Haikou, capital of South China's Hainan Province from May 7 to 10.In a congratulatory letter to the expo, Chinese President Xi Jinping said the event will provide a global consumer boutique display and trading platform, which is conducive to the sharing of opportunities in the Chinese market by all countries, to the recovery and growth of the world economy, and to provide the world with more high-quality consumer products by China.China is willing to make use of the advantages of the Hainan free trade port (FTP) in comprehensively deepening reforms and experimenting with the highest level of openness, deepen bilateral, multilateral and regional cooperation, and work with all parties to create a better future for mankind, Xi said.From the trade barometer of the Canton Fair in South China's Guangdong Province and the China International Import Expo in Shanghai, to the China International Fair for Trade in Services in Beijing, China's national-level trade expo league has ushered in a new member - the CICPE, which is focused on quality consumer goods, adding a fourth wheel driving the nation's economic development while offering a silver lining for global consumer products business that has been hit hard by the COVID-19 pandemic to tap into the huge potential of the Chinese economy that has been on a rapid recovery path since the second half of last year.Thanks to the Chinese government's effective and timely control of coronavirus, bringing social and economic life back to normal as early as possible, offline events like the CICPE could realize to highlight the country's consumption power on the global stage and offer participating companies business opportunities, instilling growth momentum to the world's economy that has been continuously picking up, global business leaders and industry observers told the Global Times. 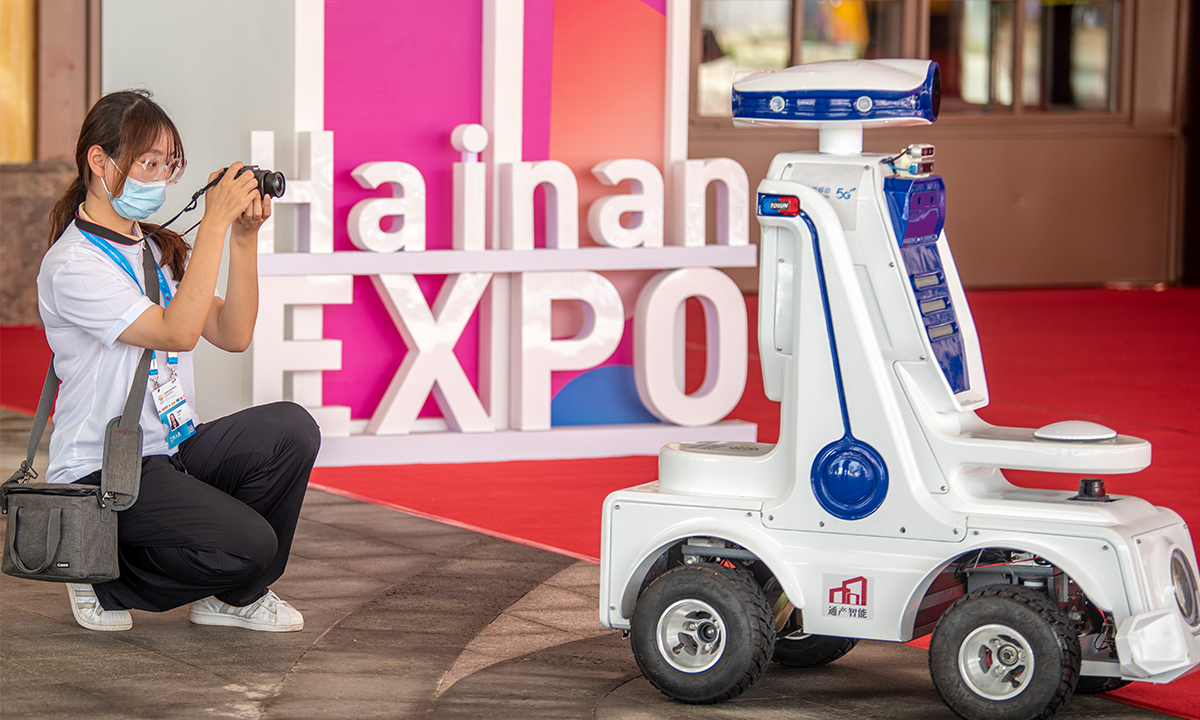 A participant at the first China International Consumer Products Expo (CICPE) takes a picture of a patrol robot at the expo center on Thursday. The CICPE is scheduled in Haikou, capital of South China’s Hainan Province from May 7 to 10. Photo: IC

The CICPE, set to be the largest consumer goods expo in Asia, also opened a new window for global brands to make a foray into the Chinese market via Hainan island, where the country has been ramping up efforts to build a globally influential free trade port (FTP) by the middle of the century focusing on facilitating trade and investment, demonstrating the nation's practice in implementing pledges to further open up, they added."With China's 'dual circulation' strategy, in which domestic and overseas markets reinforce each other with the domestic market as the mainstay, consumption has become the core driving force for economic development. The CICPE conveys an important message of China's determination on opening up business opportunities, as high-quality consumer products will gather at the expo with international exposure," Fabrice Megarbane, president of L'Oréal North Asia Zone and CEO of L'Oréal China, told the Global Times.More than 1,300 global brands from 69 countries and regions signed up for the international consumption gathering that contains five boutique sections - high-end foods and supplements, fashion accessories, jewelry and diamonds, lifestyle and outdoors, and hospitality and professional services.More than 800 domestic brands from China's 31 provincial-level regions will also participate.

High-end on displayFrom premium watches, exquisite jewelry, to high-end cosmetics, luxury cars and yachts, a slew of leading international brands are vying for attention during the mega consumption products fair, as they are pinning their hopes on China, the only economy that achieved positive growth last year after emerging from the virus-trapped mire. Philippe Pedone, head of International Development for French high-end department store chain Galeries Lafayette, told the Global Times that "We are happy to participate in the first CICPE, a new illustration of our determination to bolster our presence in China over the next few years."Following the grand opening of two flagship stores in Beijing in 2013 and Shanghai in 2019, the group signed an agreement in October 2020 to open the third one in 2022 in Guiyang, capital of Southwest China's Guizhou Province. The French group aims to open eight stores in China by 2025.The world's three leaders in luxury - Moët Hennessy Louis Vuitton (LVMH), Kering, and Richemont - will all present extensively at the CICPE with their latest high-end products. LVMH said on the company's WeChat account that its presence at the expo is designed to show continued leadership within China's luxury industry.LVMH, the sector's biggest one and owner of more than 70 brands ranging from Moet & Chandon champagne to Guerlain cosmetics, recently posted first-quarter revenues that even exceeded 2019 pre-virus levels, thanks to the standout market like China where virus-caused impact was largely cushioned.As the guest country of honor, Switzerland will also seize the expo as a golden opportunity to help its watch industry rebound.Swiss watchmaker Swatch will bring its renowned brands like Longines, Radar, Tissot, Mido, and Swatch to the expo.In 2020, Swiss watch exports fell by 21.8 percent to 17 billion Swiss francs ($18.6 billion) compared with the previous year, data from the Federation of the Swiss Watch Industry showed.A report by Bain said China was the only growth market among major destinations for Swiss watchmakers, with exports up 20 percent to almost 2.4 billion francs, while Chinese luxury consumer purchases have shifted to local stores due to travel restrictions.China is on track to become the biggest luxury market by 2025, as wealthy Chinese consumers travel less and spend more at home, according to a Bain report.Luxury goods sales in Chinese market almost doubled on a yearly basis in 2020, compared with the global sales drop of 23 percent."Luxury consumption has become the highlight of China's current consumption upgrade. Luxury goods are moving from niche to mass consumption. This can also be seen from the venue settings of the first CICPE," said Bai Ming, deputy director of the international market research institute at the Chinese Academy of International Trade and Economic Cooperation, a think tank under the Ministry of Commerce."In order to grasp the huge Chinese market despite the travel restrictions, it is now the turn of luxury brands to deliver their products to the hands of Chinese consumers," Bai noted. "Consumption and a market upgrade drive new momentum for cross-border e-commerce consumption, plus the rising middle income group and generation Z are bringing changes to shopping and consumption preferences, and in turn, change the layout of retail," Melody Jia, general manager of Suning International, told the Global Times on Thursday.Betting on Hainan FTPLooking behind the expo, an array of favorable policies on free investment and trade in Hainan have played a hugely supportive role. International brands are betting on the FTP's dividend to strengthen ties with the Chinese economy."We are convinced that meetings that will take place during this exhibition will help boost this ambition, in the heart of a high-potential region that offers particularly attractive development prospects thanks to the free trade principle initiated by the Chinese authorities last year," said Pedone of the Galeries Lafayette.In June 2020, Chinese authorities released a master plan for the Hainan FTP, aiming to build the southern island province into a globally-influential high-level FTP by the middle of the century. China's largest special economic zone is expected to play a frontline role in China's integration into the global economic system."Under the 'dual circulation' strategy, Hainan as the new international tourism consumption center is growing rapidly, which will bring new growth opportunities for global consumption," Rashid Qureshi, chairman and CEO of Nestlé Greater China Region, told the Global Times.