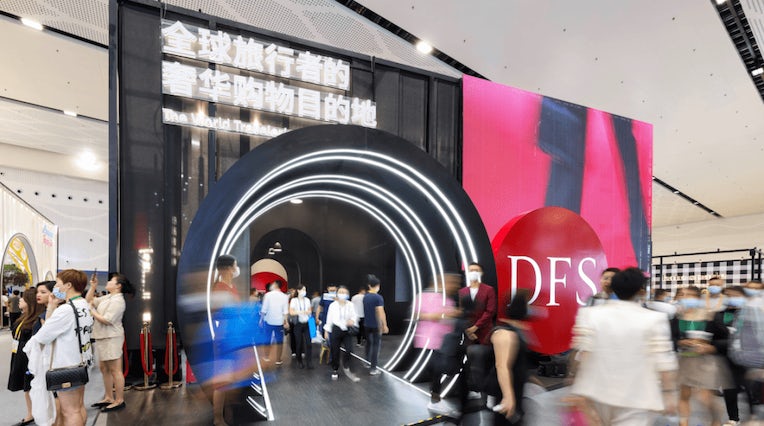 The DFS pavilion at the Expo. CICPE

The first China International Consumer Products Expo (CICPE), held in Haikou, the capital of Hainan Province, ended its four-day run today. More than 648 international companies exhibited more than 1,300 brands and attracted more than 30,000 buyers and professional visitors over the course of the event.

According to a Global Times report, the fashion and lifestyle exhibition area, which included large-scale booths from luxury giants LVMH, Richemont and Kering, was the liveliest and most crowded area of the Expo.

Many brands used the exhibition as an opportunity to introduce new brands and products into the Chinese market, with Shiseido, for example, launching its Ginza and Baum brands in China. Swatch Group, L’Oréal Group, De Beers and many other brands also launched new products during the event.

Galleries Lafayette’s head of international development also used the platform to talk more about its plans to expand in China, including an upcoming third store in Guiyang and the potential for the group to have eight stores in China by 2025.

Exhibitors also said that Hainan, which has benefited its special status as a domestic duty free port, will become an important gateway for promoting trade and connecting global markets.

Fabrice Megarbane, president of L’Oréal North Asia and Chief Executive of L’Oréal China, told Xinhua: “We believe that the business environment in China will become more friendly as the opening measures deepen, multinational enterprises have access to a wider range of resources.”

A report jointly released recently by KPMG China and The Moodie Davitt Report at the Expo predicted that Hainan’s free trade port will soon become the world’s biggest duty-free market if it continues its current growth trajectory.